An eminent international jury to evaluate the works in the architectural competition 'House of the Future. Best SunRoof Project 2020' 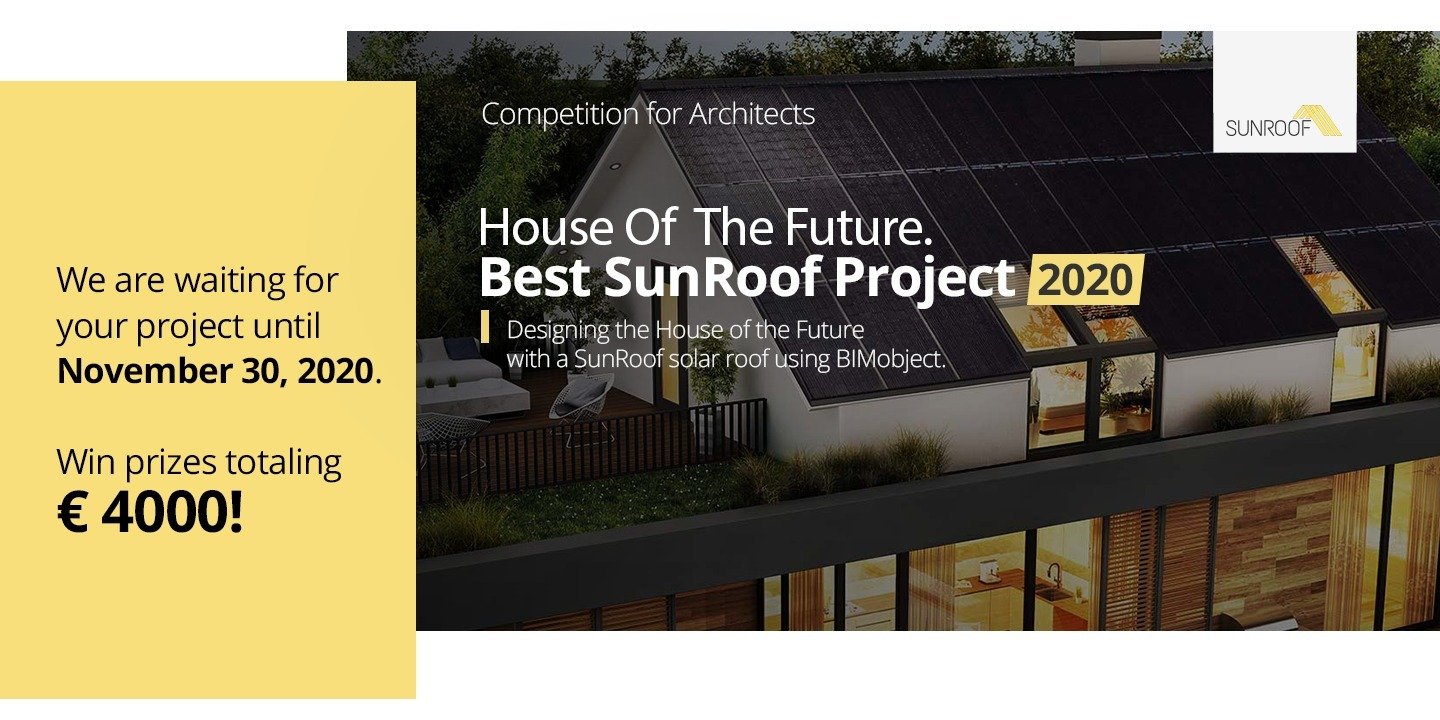 An eminent international jury to evaluate the works in the architectural competition 'House of the Future. Best SunRoof Project 2020'

Until 30 November 2020, professionals and students of architecture from all over the world can submit their works in a competition for the best project of a visionary house that uses renewable energy source (RES) technology. The winners will be selected by an eminent international jury composed of prominent personalities with leading voices in the field of sustainable design and activities related to climate neutrality.

'House of the Future. Best SunRoof Project 2020. Designing the House of the Future with a SunRoof solar roof using BIMobject' is a prestigious international architectural competition organised by SunRoof and BIMobject. It promotes architects who boldly seek innovative solar solutions and create intelligent houses, ones which respond to changing external conditions automatically. These are designers who combine solar energy with the idea of a smart home, electromobility and the latest in ecological trends.
The winners are to be selected from among the best works, in terms of skills, visuals and aesthetics, and will receive awards worth a total of 4000 euros.

The fact that the competition has attracted so many prominent experts shows how important the transition to sustainable energy is, and how much we can achieve together in this direction. We want this unique project to be an opportunity for architects to discover environmentally friendly solar technology and to create good design

- says Lech Kaniuk, CEO of SunRoof, a member of the competition jury.

The Ambassador of Sweden, Stefan Gullgren, accepted the invitation to join the jury. Moreover, the Embassy of Sweden has assumed honorary patronage over the competition. As SunRoof has its roots in Sweden and since Scandinavia supports the green energy transition in Poland, such a project is a perfect fit with joint efforts toward climate neutrality.

Solar roofs clearly show us that we can combine sustainability and innovative design in one solution. Fighting climate change is a joint responsibility and this technology, created in Sweden, makes it possible for everyone building a house to make a difference. I look forward to exploring all the inspiring ideas that will no doubt result from this important competition, supported by the Embassy of Sweden,

Another member of the jury is a representative of BIMobject. The co-organiser of the competition and the owner of the largest platform for parametric BIM objects is represented by Maciej Olczyk, who has been associated with developing the industry since 2014. He has implemented and developed BIM technology for one of the largest developers in Poland, placing particular emphasis on the practical use of this technology in the implementation of multi-family buildings. With BIMobject he is able to share general knowledge about BIM technology among Polish and European entrepreneurs. He is also responsible for the implementation of European projects in the company. He gained his experience while participating in multi-discipline 2D and 3D construction projects.
The works by professionals and students of architecture will also be assessed by Mokena Makeka, a world-renowned architect, urban planner and design theorist, founder and managing director of Makeka Design Lab, an international, award-winning architectural practice in Cape Town. Currently also the Creative Director at DesignWorks, a strategic design agency. In his work he focuses on perfect design principles and sustainable architecture. He has one goal: to better people's everyday lives through good and environmentally justified design. He gained fame and recognition partly thanks to the reconstruction of the main Cape Town railway station, which is used by over 270,000 people daily. He has also led many complex construction projects in Lesotho, Madagascar, Tanzania, South Africa and China, including Cape Town International Convention Centre 2017, Apartments VA & Waterfront 2017 and the Royal Palace in Lesotho. He was a member of the 2010 FIFA World Cup Task Force for Culture and Arts. Mokena Makeka won the Gold Loerie Award for Communication Design, and was the youngest to win the Awards of Merit from the Cape Institute for Architecture. He has advised the South African Minister of Human Settlement and was awarded the title of Young Global Leader by the World Economic Forum, and in 2013 and 2014 was named by the National City Press as one of the top 100 world-class South African citizens.
Natalia Chylińska, representing Builder Polska, the media partner of the competition, is also a member of the jury. In her professional work she focuses on the area of Architecture & Design. She devotes much attention to the prestigious investments presented within the editions of the Builders Library – Builder Exclusive. Photography is her greatest passion. She is continuously striving for self-development, which has led to her gaining an education in the field of professional photography and photo techniques. Her portfolio includes some interesting architectural photoshoots.
Weronika Konior from Architektura-murator, the media partner of the competition, will also help in the selection of the best projects. An architect, graduate of the Faculty of Architecture of the Cracow University of Technology and the Universitat Politecnica de Valencia. Since 2019 the photo editor as well as editor for student affairs in a leading monthly about architecture, 'Architektura-murator', and secretary of the 9th edition of the national competition for the most significant architectural projects in Poland – Życie w Architekturze (Living in Architecture).
One of the members of the jury is Krzysztof Sołoducha, editor-in-chief of the Sztuka Architektury Group, the media partner of the competition. A Doctor of philosophy and lecturer in philosophy and marketing communication. He works as an associate professor at the Department of Humanities of the Military University of Technology in Warsaw. He was also a scientific editor and co-author of an anthology of texts in the field of philosophy of computer science, as well as monographs in the field of marketing communication theory and the philosophy of architecture.
Another member of the jury is Michał Pierzchalski, Ph.D. of architecture and editor-in-chief of the Architektura.info service, the media partner of the competition. A lecturer at the Faculty of Architecture at the Warsaw University of Technology, he runs a studio for energy-saving houses operating within the National Energy Conservation Agency (Krajowa Agencja Poszanowania Energii S.A.).
More information and the competition rules can be found at: contest.sunroof.se

SunRoof manufactures 2-in-1 solar roofs and innovative façades that generate electricity without having to install traditional photovoltaic modules. This is the best investment replacing the need for installing solar panels on top of a classic roof - the most efficient solution, the lowest carbon footprint, uncompromising elegance.Our mission is to speed up the global transition to renewables by developing beautiful roofs that, by generating electricity, will cover the energy demand of the entire building.www.sunroof.se