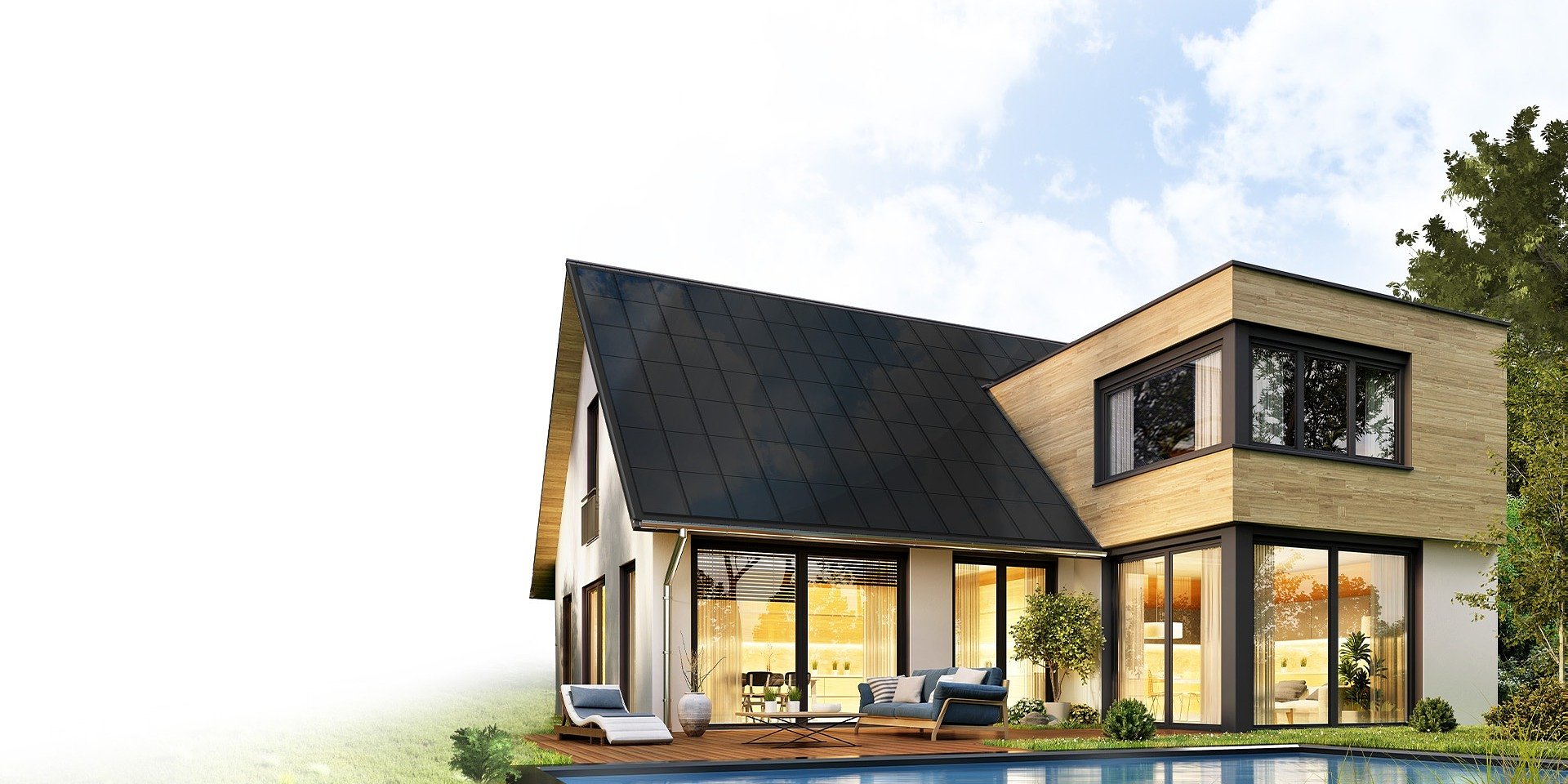 SunRoof, a Swedish startup that creates a beautiful, 2-in-1 smart roof and innovative façade that produce “green” power from the Sun, opens a branch in Germany:

Its success is determined by its key advantages: it functions as a roof while also generating electricity from the sun without additional photovoltaic installations, features excellent Swedish design, and looks like modern tiles. Fewer parts are needed compared to a standard roof & photovoltaic installation. A solar roof from SunRoof creates the smallest CO2 footprint in its category, bringing us closer to achieving climate neutrality.
In October 2016, Tesla introduced the Solar Roof and garnered worldwide attention. Since then, only a couple of States in the US have got Solar Roof installations. A further timeline for Europe and Australia is missing. The question or requirement is clear, if a new building or a roof renovation wants solar, why should it need a second layer of roof tiles?
The technological innovation from SunRoof will close that gap. The target group for the integrated SunRoof is not only people who are looking for a premium roof; it is a solution for everybody interested in outstanding design. From an easy perspective, it is organised in three levels. The base is waterproofing, the middle builds the wooden framework, and the cover is created with glass-glass solar modules which turn sunlight into electricity and are also the water-bearing layer. The cover layer of SunRoof takes over the function of the roof tiles and a standard photovoltaic system.
SunRoof continues to create an entire ecosystem of solutions to support smart energy management – from a solar roof, a power monitoring and management app, to a unique solution on the Europe-wide energy marketplace, enabling the sale of excess energy from solar roofs.

SunRoof was established in 2013 in Sweden with the mission of creating a roof which looks modern, is consistent with the house architecture, and offers everyone access to sustainable energy. While the first years were mainly spent on developing and testing its own technology, SunRoof gained momentum in 2018 after Lech Kaniuk joined the company. Lech Kaniuk has successfully founded, invested and managed a number of well recognised companies and was a co-founder of Delivery Hero. One year after the experienced entrepreneur and investor joined the company, SunRoof recorded 500% growth, year-on-year, even before it started expanding abroad. Last month, it announced the acquisition of €2 million in funding from Europe’s leading VC funds, which it wants to spend on expansion into new markets. A series A funding is planned for Q1/Q2 2021 to roll out this outstanding technology country-by-country.

Germany is a pioneer in implementing the energy revolution. Integrated solutions are the future of ecological construction, which is why we are introducing Scandinavian technology to the German market. By combining innovation and good design, we want to actively participate in creating the sustainable cities of the future and switching to renewable energy. I am convinced that with Robert Bruchner on board, who will be responsible for business activities in Germany and who understands how important the development of clean technologies is for us, we can strengthen our participation in the green energy transition

Robert Bruchner gained significant experience during 13 years at different companies and in different roles in the solar & storage industry. Before the new Country Manager Germany at SunRoof started his first job in the solar industry in 2007, he installed a PV system on his parents’ house to get hands-on experience. During the last four years, he was responsible for launching Tesla Powerwall 1 & 2 in the D-A-CH region and building up the Powerwall Sales team. The Ex Tesla Channel Sales Manager created the Certified Installer network from scratch.

I am looking forward to launching such a product like SunRoof with so many benefits. The roof and photovoltaics will be installed without unnecessary roof tiles, hooks and a solar mounting system. The combination of string inverters or optimiser modules, as well as storage, heat pumps and wallboxes are possible. Everybody who gets a quote will be surprised how competitive the price for the roof integrated solution will be

The future trend for SunRoof will be that, in a couple of years, for every new build, a photovoltaic system will be mandatory in central Europe. In 5 to 7 years, every new house will have an integrated Solar Roof.

SunRoof manufactures 2-in-1 solar roofs and innovative façades that generate electricity without having to install traditional photovoltaic modules. This is the best replacement for a regular roof, offering the highest efficiency, the lowest carbon footprint, and a unique aesthetic. Our mission is to speed up the global transition to renewables by developing beautiful roofs that, by generating electricity, will cover the energy demand of the entire building.
www.sunroof.se